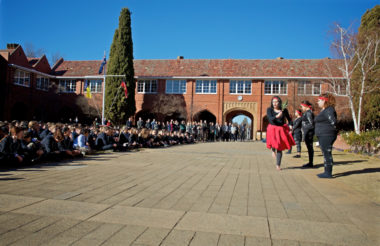 To coincide with our 100th anniversary in 2029, the CGS Foundation Centenary Project aims to grow the cumulative total of our corpus to $20.29 million (including distributions) to make possible the next stages of our campus development and scholarship plans.

The Centenary Project’s purpose is underpinned by our aspiration to provide unparalleled excellence and opportunity, and our vision to see 100 students educated at CGS on Indigenous and equity scholarships, in addition to our current scholars, by the time we reach our 100th year.

The Project aspires to four tiers of giving whether it be from individuals, families, corporates or groups:

Centenary Community – donations or pledges of $2000 over the next seven years. Donate here.

Centenary Partners – donations or pledges of $20,000 over the next seven years. A single gift of $20,000 may be made by using the General Donations button here. For gifts by installment or other methods of giving please contact Tammy Foley in the CGS Foundation office on 02 6260 9665.

Centenary Patron – a donation or pledge of $2 million over the next seven years. Those considering becoming a Centenary Patron are invited to contact Justin Garrick, Head of CGS on 02 6260 9700.

All donations over $2 are tax deductible.

Why is the CGS Foundation necessary?

Contrary to common perception, the School does not receive high levels of government funding. It relies very heavily on its community’s support in the form of tuition fees and donations to the Foundation. In fact, government funding accounts for only around 15% of total School revenue, and that proportion is falling as funding is reduced in real terms over time and as grants for the development of capital infrastructure have become less common.

At the same time, there are many families for whom tuition fees are a significant sacrifice, on top of which come all the extras that go with an extraordinary education: textbooks, technology, musical instruments, sporting equipment, uniforms, excursions, camps and tours.

The Foundation exists to fund the scholarships and bursaries that encourage and make it possible for students of talent to join the School and make a CGS education accessible to many for whom it might otherwise be out of reach. It also exists to reduce the burden on parents over time by supporting the cost of building and maintaining facilities that would otherwise have to be funded almost entirely by fee revenue.